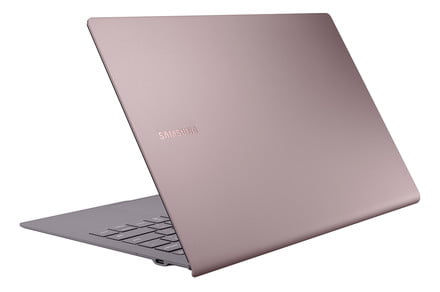 The first laptop with Qualcomm’s 8-core Snapdragon 8cx processor is Samsung’s Galaxy Book S, and if Samsung’s claims hold up, this could be the Windows laptop to buy for people who find themselves often working out of the back of a cab. Why? Not only does it have LTE, but Samsung’s claiming a whopping 23 hours of battery life.

It’s quite potentially the perfect lightweight laptop — here’s what it’s like.

I love lightweight laptops. I’m often the guy walking around trade shows like CES with a laptop in my hand as I finish writing a story. If not, my laptop is always in my backpack, which I carry everywhere, so being as light as possible is the best possible feature. That’s where the Galaxy Book S impresses the most on first impression. At just 2.1 pounds, it’s well over a half pound lighter than the MacBook Air, and it’s a joy to hold and type on at the same time.

The build material — not so much. Samsung said it’s a “premium anodized aluminum frame on the top and base,” but it feels a bit plasticky and cheap. Hold the edges of the laptop and you can hear it click a little bit, as though the parts aren’t entirely held together. It’s a bit worrying, but longer-term testing will be required to see the durability of this machine.

It’s a joy to hold and type on at the same time.

Still, the design makes up for it. It resembles a Surface Laptop 2, which is a good thing, because it looks sleek and modern. The slim bezels around the 13.3-inch screen help make it look contemporary, too. I like the screen size — it’s big enough to get work done with, and perfect for watching videos too. The screen resolution is 1,920 x 1,080, and it looks sharp, though it didn’t get as bright as I would have liked. It is a touch screen, and Samsung said you can wake the device with a quick tap, just like a smartphone.

The keyboard is clicky, and maybe makes a bit too much noise for my taste, but it feels nice to type on.

This is a Windows laptop (Windows 10 Home, specifically), and it’s powered by Qualcomm’s new Snapdragon 8cx processor. It’s the first laptop using this chipset, so we don’t quite have a proper reference point on how this laptop will perform. Previous attempts at implementing Qualcomm ARM chips in laptops have resulted in poor performance, but the 8cx aims to correct that. This chipset competes against Intel’s latest generation Core i5 processor, so it should be able to power average daily tasks without issue. It felt snappy in the brief time I used it, but that’s hardly a good measure for performance. Time will tell.

There’s 8GB of RAM and 256GB of solid state drive storage, but there’s also a hidden MicroSD card slot in case you need to add more space or transfer files. It’s in this tray that you’ll find the SIM card slot so you can add LTE connectivity. Now, there’s no Wi-Fi-only model, so you get the option for LTE no matter what. LTE service is only available through Verizon.

LTE connectivity is what makes this laptop perfect for those who want to work anywhere. It ensures you stay connected whether you’re in the back of a cab, in a coffee shop, or walking around the showfloor at CES.

To go with the theme of working anywhere, you need a laptop that won’t give you battery anxiety. Samsung claims the Galaxy Book S can last for 23 hours on a single charge, which is impressive.

It’s less impressive when you look at the fine print:

LTE connectivity is what makes this laptop perfect for those who can do their work anywhere.

“Based on results from internal lab tests for local video playback time conducted by Samsung. Test results are estimated values of the battery sample from a pre-release version tested under default settings (audio volume and brightness levels) without connection to Wi-Fi or mobile network.”

So the battery claim of 23 hours is based on a test that didn’t use Wi-Fi or LTE, which can typically impact battery life greatly. Expect real-life usage to deliver less, and we’ll make sure to see what it’s like to use completely on LTE.

There are two USB-C ports, as well as a headphone jack. To juice it back up, the Book S supports USB Power Delivery 2.0, and Quick Charge 2.0 — it’s a bummer there’s now Power Delivery 3.0 or Quick Charge 4+ support. Still, if you have a Galaxy Note 10 Plus, you can use the 45W charger to keep this laptop powered.

What else is there? A 720p camera sits at the top of the screen, there’s a fingerprint sensor embedded inside the power button key at the top right area of the keyboard — it feels glossy so it’s distinguishable — and there are also stereo speakers powered by AKG (with support for Dolby Atmos).

You can also connect your phone to the laptop using Microsoft’s Your Phone app to see notifications, recent photos, and send and receive texts. But pair a Galaxy Note 10 or Note 10 Plus and you can mirror the screen and control it from your laptop as well.

The Samsung Galaxy Book S costs $999, and it will be available in the U.S. this fall. The LTE connectivity will exclusively be accessible through Verizon. The global launch will be arrive in September.

There are two color options — Earthy Gold and Mercury Gray — but only the latter will be carried by Verizon.

The Galaxy Book S is a promising step for Samsung, and also Qualcomm — but it has a lot to prove. I can’t wait to see what it’s like to use such a lightweight laptop on the go and stay connected. Let’s just hope the Snapdragon 8cx is powerful enough for the task.

What to buy on Prime Day 2020: Laptops, smart devices, tablets, and more

Our guide to what to buy on Amazon Prime Day 2020 will help you find the best discounts on tech like tablets, laptops, kitchen appliances, and more.
Read more

Common iOS 14 problems and how to fix them

Not only has Apple's iOS 14 launched a ton of advanced new features, but the rollout has also been quite smooth. We found a few minor glitches and fixes.
Read more

Master the Art of Digital Branding With 10 Courses for $45

Many of the world's biggest companies did not reinvent the wheel — they merely built a strong brand. If you
Read more

These are the best rugged Android phones

More and more often, phones are being released with shiny glass backs, smooth metal frames, and other design elements to
Read more